It has been a protracted process, but the Foosaner Art Museum in Melbourne’s Eau Gallie art district closed at the end of July. It took over a year to finalize the closure of the museum, which was sold by the Florida Institute of Technology to Orlando developer Northboro Builders Inc.

Northboro Builders Inc. of Orlando plans to demolish the Foosaner Art Museum and build a hotel and parking lot after the two large works of art on the front of the building have been moved. NORTHBORO CONSTRUCTORS INC.

The museum had over 5,000 objects in its permanent collection. Almost all of them were transferred to the Appleton Museum at the College of Central Florida in Ocala. Appleton has confirmed receiving the collection, but withholding comments until it is ready to exhibit it. 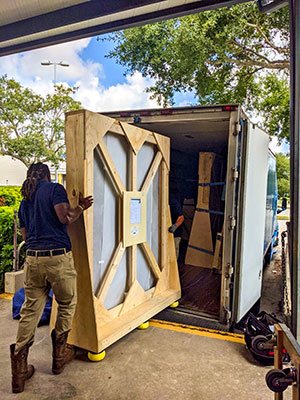 Most of the museum’s permanent collection has been transferred to the Appleton Museum at the College of Central Florida in Ocala. FOOSANER ART MUSEUM

The only remaining end is the fate of two large works of art on the exterior walls of the museum. One is a giant two-story steel object by artist Fritz Van Eeden. The other is Hot Rods by artist George Snyder. Both are attached to the exterior of the museum and will be expensive to move, requiring oversized cranes and load trucks. Museum director Ashley Milliken said the museum was working with FIT on plans to remove the pieces and move them.

Northboro developers plan to demolish the building and erect a hotel and parking lot.

Foosaner has been around since 1978 and was purchased by FIT 10 years ago. While the museum had a loyal following in the Melbourne community, it was never profitable. Faced with financial constraints, in part due to COVID-19, FIT decided over a year ago to close the museum and sell the property.

The Ruth Funk textile art collection, which was housed at FIT, was recently closed and is part of the transfer to Appleton. There was a collection of NASA art and photographs from the moon landing era that did not go to Appleton and will instead be housed on the FIT campus.